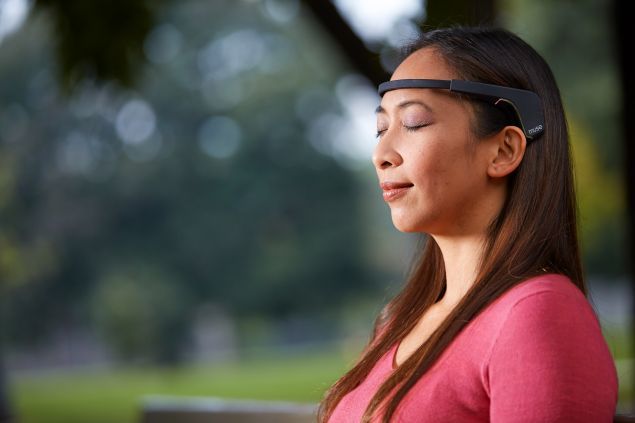 Last month I attended the transformative technologies conference at Sofia University in Palo Alto California, where some of the brightest minds on the planet discussed the next billion dollar industry: technologies for self awareness and awakening.

Still in its infancy, the focus of transformative technology is wearable devices (hardware) and apps (software) that measure, collect data and give you feedback on breathing, heart rate variability, brain wave activity, stress and fear responses and other signals that when measured, monitored and adjusted can help you manage your moods, have a more effective meditation practice, learn to live, breathe, think, feel, and perform better. Its true that these gadgets increase self-awareness. It begs the question, what is a Self? The question is, can a Wearable get you there? How much data do you need to gather to know God?

For example, moti.io is a Pavolovian style mouse-like gadget which helps you entrain a new habit by flashing different colored lights at you to remind you to ‘do’ whatever new habit you are trying to form, like remembering to drink water frequently, stretch your body etc. I can see the usefulness of such a thing to break the mold of a prescribed daily habit. You shed one habit that of not drinking water and you inhabit another, that of an incessant relationship with a gadget. Other gadgets are conceived as wearables, like the Lief, an ECG patch which has been ‘scientifically shown to improve control over your flight or flight response’, that a cynical friend of mine described as a choke collar,  or a VR device that visulaizes your breath as a puff of snowflakes or colored lights that allow you to ‘move’ through a virtual landscape, making breathing a game. The more deeply you breathe the more mobility you have. If you haven’t developed somatic awareness or spend too much time in your head, these tools are helpful.

I sat in a crowded anteroom with a headband on my head from a company called Muse, that promised to help me meditate better. As I breathed in and out, Muse would measure my brain waves and play the sound of crashing waves in my ear if my mind was wandering and give me the sound of birds chirping if I hit a moment of ‘no thought.’ In 5 minutes of meditation the birds chirped 3 times for a few seconds, and the lady told me that was ‘good’ and I felt how low the collective bar was for “no thought.” What’s wonderful about a device like Muse is that it gives one somatic feedback for what ‘no thought’ feels like, and in time you can entrain yourself to hit that state even without the device, if in fact that is the state being measured. One way to self-check is to keep in mind that states of profound silence and stillness have an ‘Eternal Now’ feeling to them. These states can’t be maintained very long without a kind of inner training and the discipline to still the mind consciously for periods of time. That stillness is like a reset button. In that stillness thoughts ‘arise’ in your mind from the pre-frontal cortex instead of from the amygdala, and you, the thinker, recognizes that while these are ‘your thoughts’, they are qualitatively different from your normal mind stream, which you now recognize as the fear-based mind-chatter that we all experience from time to time. These thoughts ‘ARISE’ in your MInd. You feel more like the Witness than the Thinker, and yet, they are your thoughts. They inspire you and make you feel grateful

Did you know Your Brain Waves Can Make Art?

One of the nicest things at the transtech conference was a large LED wheel or ‘chakra’ with colored lights on it that would change pattern depending on the brain waves of the people who were attached to it by a bluetooth wearable. This was created by laser light artists and programmer Peter Tjeedsma of Illuminationart.org It was a beautiful non-judgmental, ever-morphing panorama of this amazing brain and unfathomable mind we possess.

Mastering our minds: from healing bi-polar to transcendence

I was late for this workshop and I walked in to the words ‘Bipolar is the low-hanging fruit of enlightenment” That caught my attention because I have been feeling for a while, that this thing we call mental illness is a serious misdiagnosis of a condition that is really more of a shamanic encounter along an evolutionary path. Tribal cultures regard what we call ‘psychoses’ as shamanic initiations, and there is a certain logic to that. The shaman journeys within, to reconcile, find God, the Great Unity inside. In doing so he or she is healed. That’s the sum of it. Because of the centuries of limited access to the Plant Technologies, which are sophisticated al-chemical processes designed by nature to help us climb that evolutionary ladder between in-divid-dual Self and God, we live in a culture of mental dysfuctions like ADD, ADHD, bipolar, schizophrenia, depression, PTSD, sanctioned psychosis, violence, war and more. Gino Yu, a professor from Hong Kong presents a perfecty logical idea that the ‘bipolar’ person is actually experiencing the energy of transformation, but is unable to ground it in their body because they have an overlay of fear, desire, and need distorted by many mental concepts or projections, that they are unable to ‘decouple’ from. Decoupling is an important word in this explanation, because someone with bipolar is in a dualistic mindset.

Your Body is the Ultimate Wearable

Awakening to your ‘natural state’ or ‘true nature’ is the breaking or melting of a much bigger mold than addictions or bad habits. It is the mold of the over-thinking mind and the frozen heart. I maintain that this meta-mold cannot be broken or melted without God entering the picture. Whatever picture or ideas that word ‘God’ conjures up for you, I’m referring to an experience of ‘Divine Union’ within, and it is a triune leap– physical, psychological and metaphysical. You know God. You become One with God. Whether you achieve this with breathing, yoga, fasting, entheogens, writing, painting, cooking, or some combination thereof, its characteristics and effects are the same for all humans. You heal because your issues melt into the melting pot of ‘divine mind’ the collective consciousness. You step into the master of archetypes. About the Author: Lakshmi Narayan is the Creative Director of Awake Media a design studio that build brands and websites. She believes that the current systemic dysfunctions and crises are precursors to a global spiritual awakening.